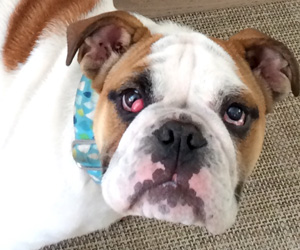 Help care for Curly with your donation

Curly is available to Sponsor!

Curly is a handsome, sweet and silly 5-month-old English Bulldog puppy that came to AFRP from the Monterey County Animal Services after being surrendered with some eye problems. This breed is prone to a condition called Cherry Eye (prolapsed gland in the third eyelid) and Curly had already had one failed surgery when he arrived at the shelter. A suture was rubbing his eye and causing a painful corneal ulcer. We had Curly examined by a specialist at Ophthalmology for Animals, and Curly was also diagnosed with severe dry eye, meaning he is unable to produce tears on his own. Curly is currently in foster care, and he is receiving eye ointment and eye drops multiple times a day while his condition stabilizes enough for surgery. He will undergo surgery to correct the Cherry Eye in late July. He will require eye drops for his lifetime. Curly will be a wonderful companion for an adopter that can provide him with the special care he will need to keep his eyes healthy far into the future. Thank you for donating towards Curly’s medical care!

Fill out an adoption application

Dogs and puppies – $300
Some dogs have sponsored adoption fees.
Compassionate Choice dogs have fees that are waived to qualified adopters. Watch for adoption promotions with discounted fees throughout the year.