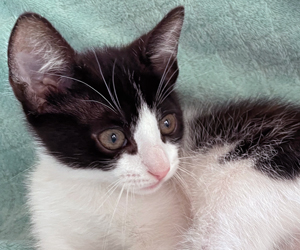 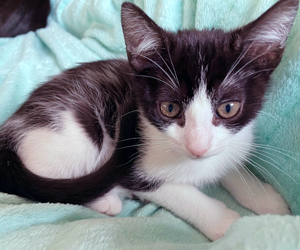 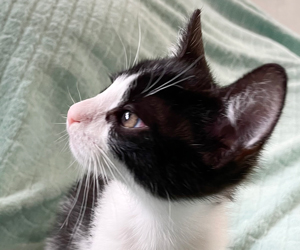 Hi, I'm Freddy. I was adopted on November 2!

Help care for Freddy with your donation

Freddy is available to Sponsor!

Freddy is a debonaire 2-month-old tuxedo kitten that was raised in foster care after coming to AFRP from the Hitchcock Road Animal Services with his siblings. Dubbed “The Vocal Quintet,” these vocal kittens love to talk to you and have you talk right back to them! Freddy is a brilliant showman voted most adventurous, most versatile and most likely to fall in love with you! He has a wacky, sunny personality and he is very brave and personable. Freddy has perfect litter box manners and he gets along nicely with other cats and kittens. He has not had any experience with dogs or kids, but would probably adjust with proper introductions. All the kittens in this litter are super active and love to play with toys, balls and wands. They wrestle, chase each other, climb cat trees and run Olympic trials down the hallways! They love each other dearly and they would love to be adopted in pairs. Freddy is currently at our Petco adoption location in Monterey. Meet and greets can be arranged after your online cat application has been received and approved.

Freddy has already been adopted!

Adult Cat – $150
Kitten – $150
Two kittens – $200
Some cats have sponsored adoption fees.
Compassionate Choice cats have fees that are waived to qualified adopters. Watch for adoption promotions with discounted fees throughout the year.