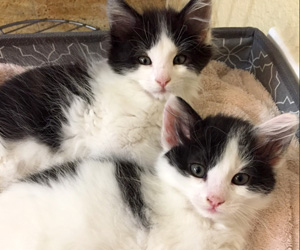 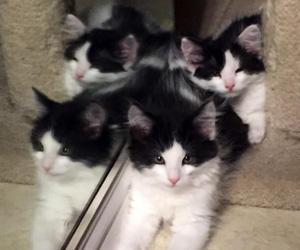 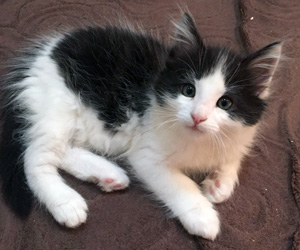 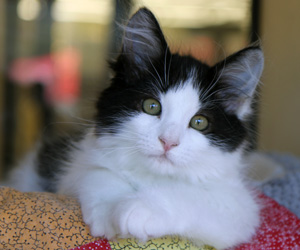 Help care for Scout with your donation

Scout is available to Sponsor!

Scout and his brother Sprout (also on web) are soft and fluffy 2-month-old black and white kittens that love to play and cuddle with each other. They were raised in foster care after being found as tiny abandoned kittens by a concerned citizen. Scout is the larger of the two kittens, and he is also a bit more shy. He’s a very sweet and quiet kitten that loves to be near people, but is still getting used to being picked up and he will wiggle and squirm at first. Once Scout gets to know you, he will follow you around the house and he will sit and watch everything you do. He has excellent litter box habits and he will play with any toy he can get his paws on! Scout will do best with a quiet and patient adopter that will take some time to form a bond of trust. Scout has not been exposed to dogs or children. He would love to be adopted with his brother Sprout. Scout and Sprout are currently at our Pet Food Express adoption location at the Crossroads in Carmel. Meet and greets can be arranged once your online application has been received and approved.

Scout has already been adopted!

Adult Cat – $150
Kitten – $150
Two kittens – $200
Some cats have sponsored adoption fees.
Compassionate Choice cats have fees that are waived to qualified adopters. Watch for adoption promotions with discounted fees throughout the year.